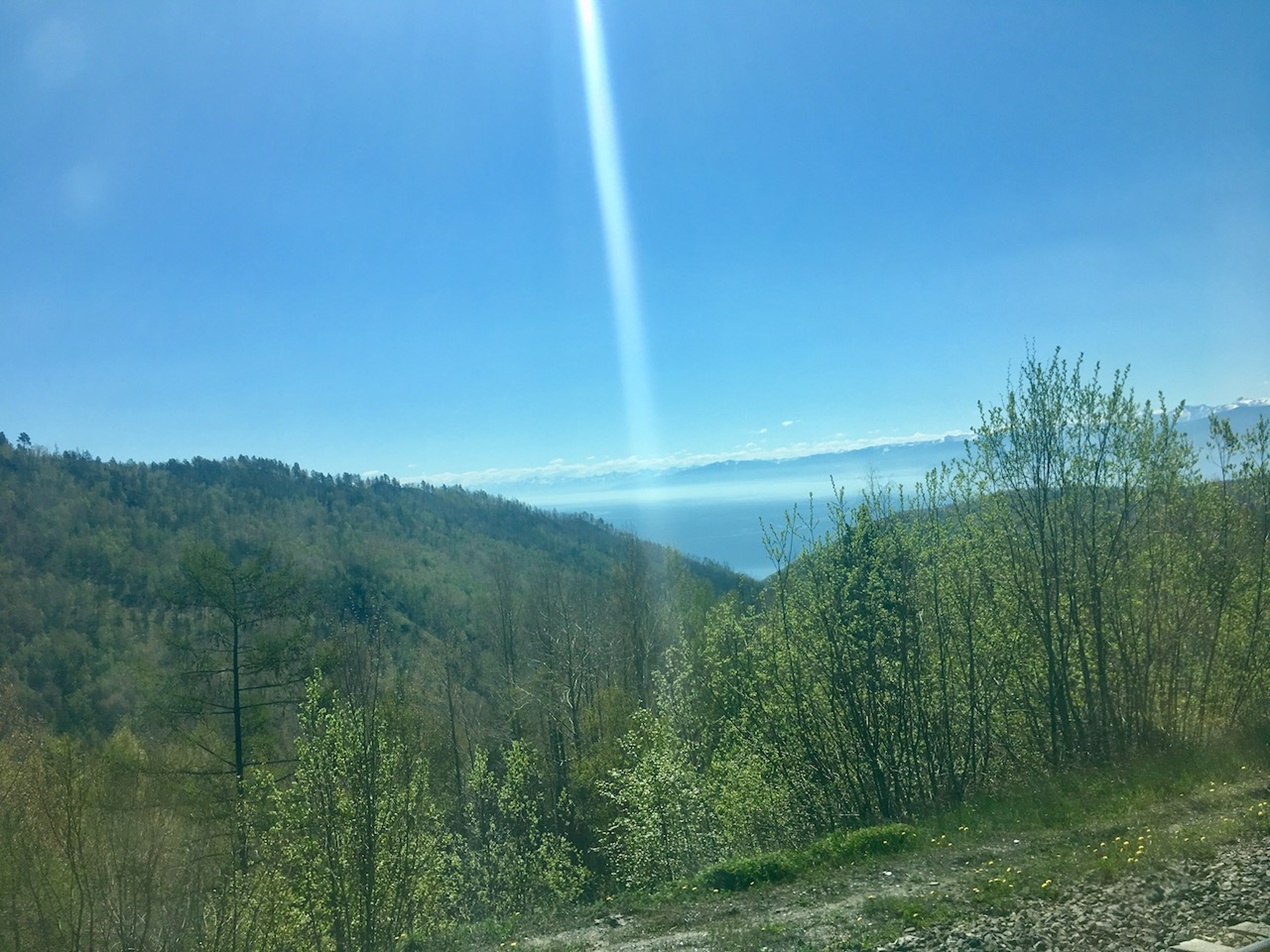 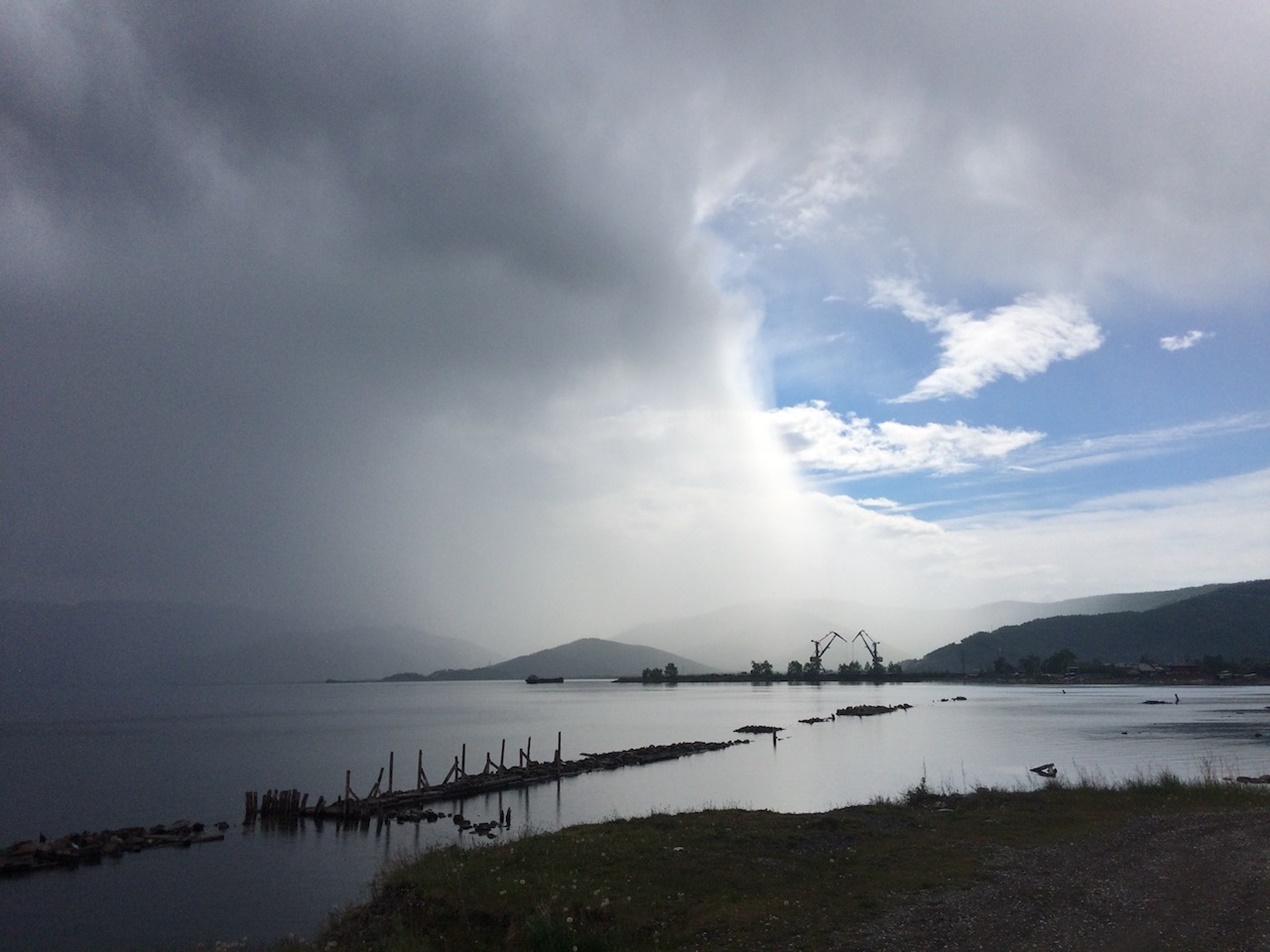 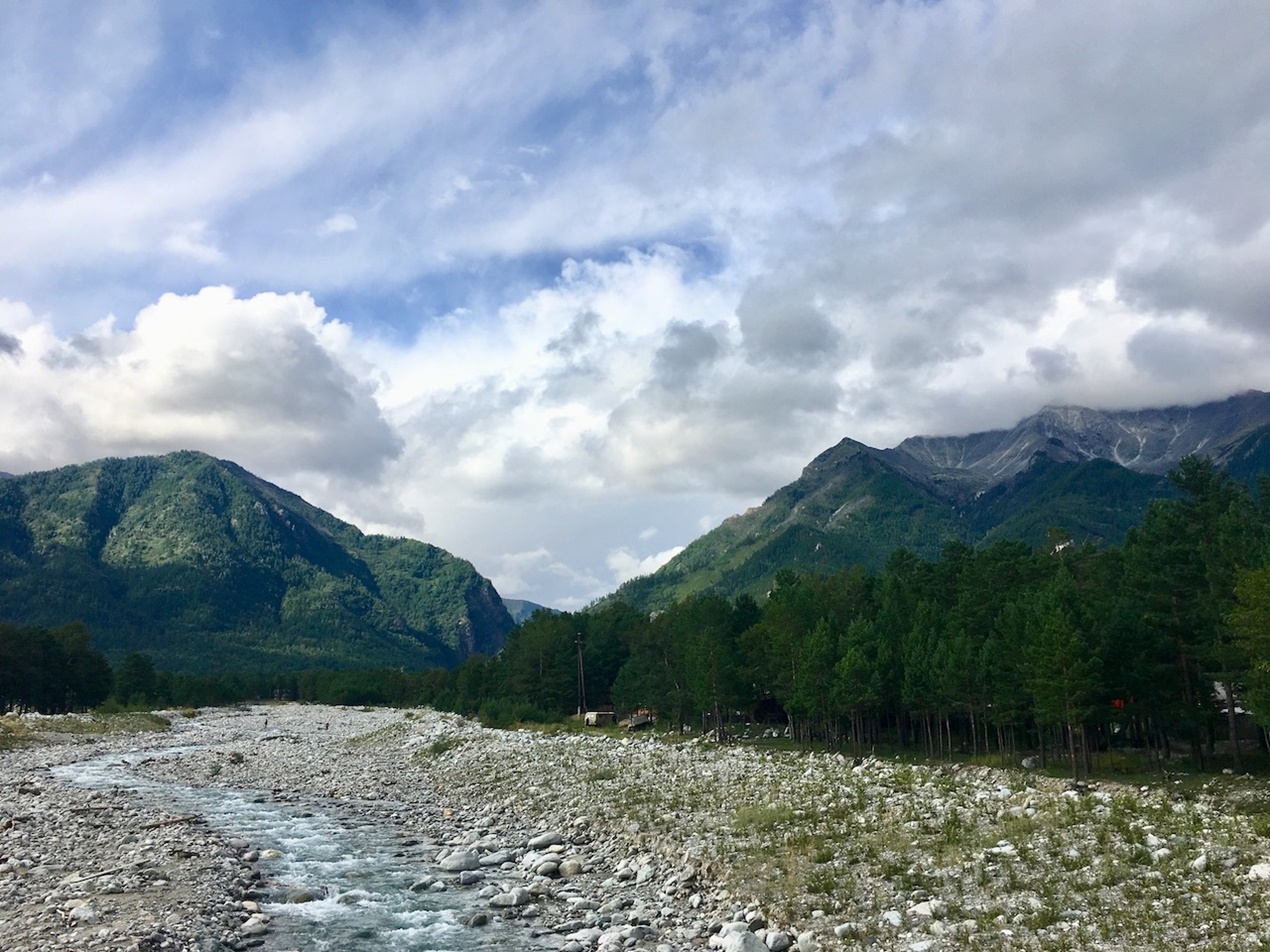 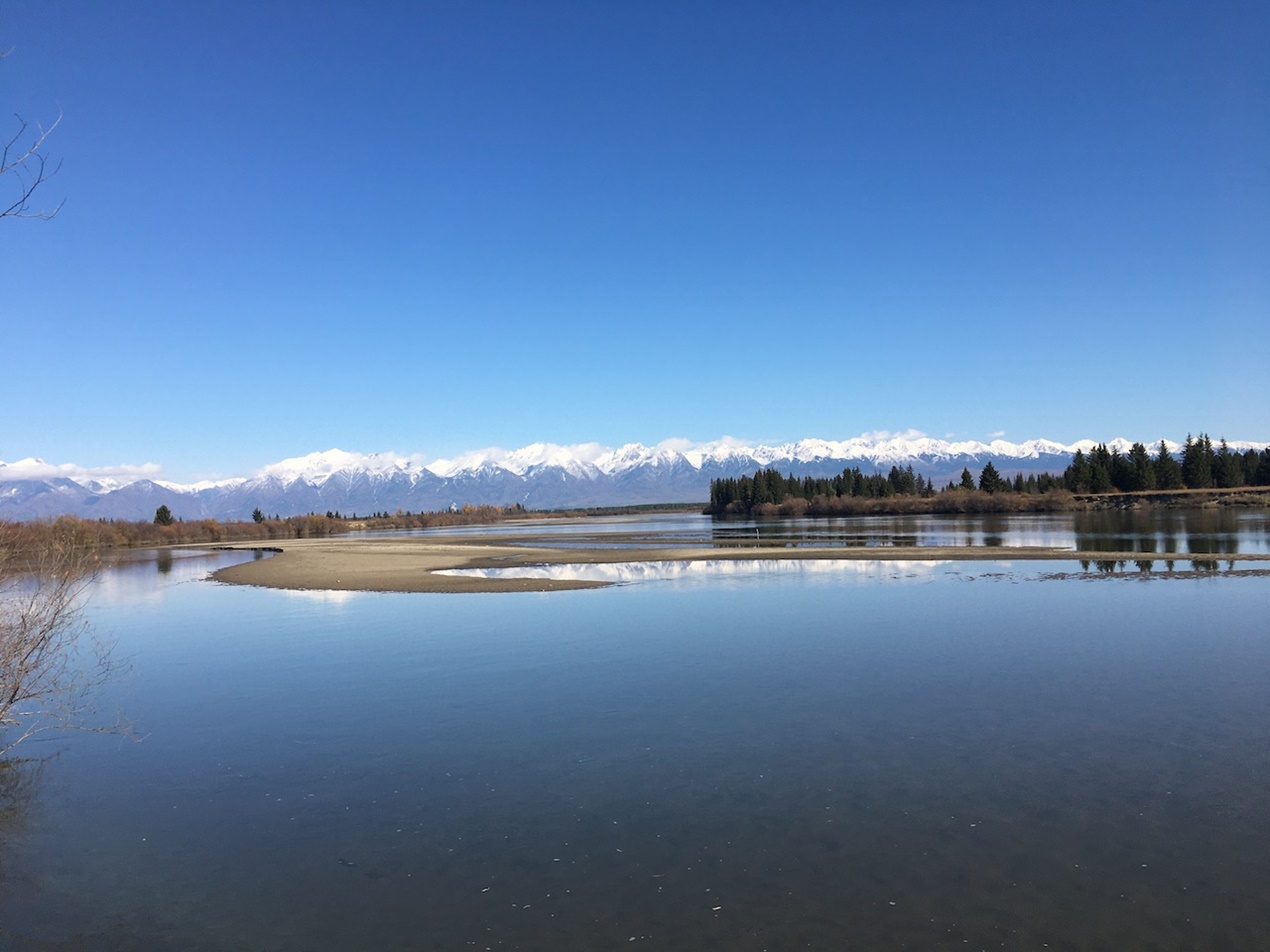 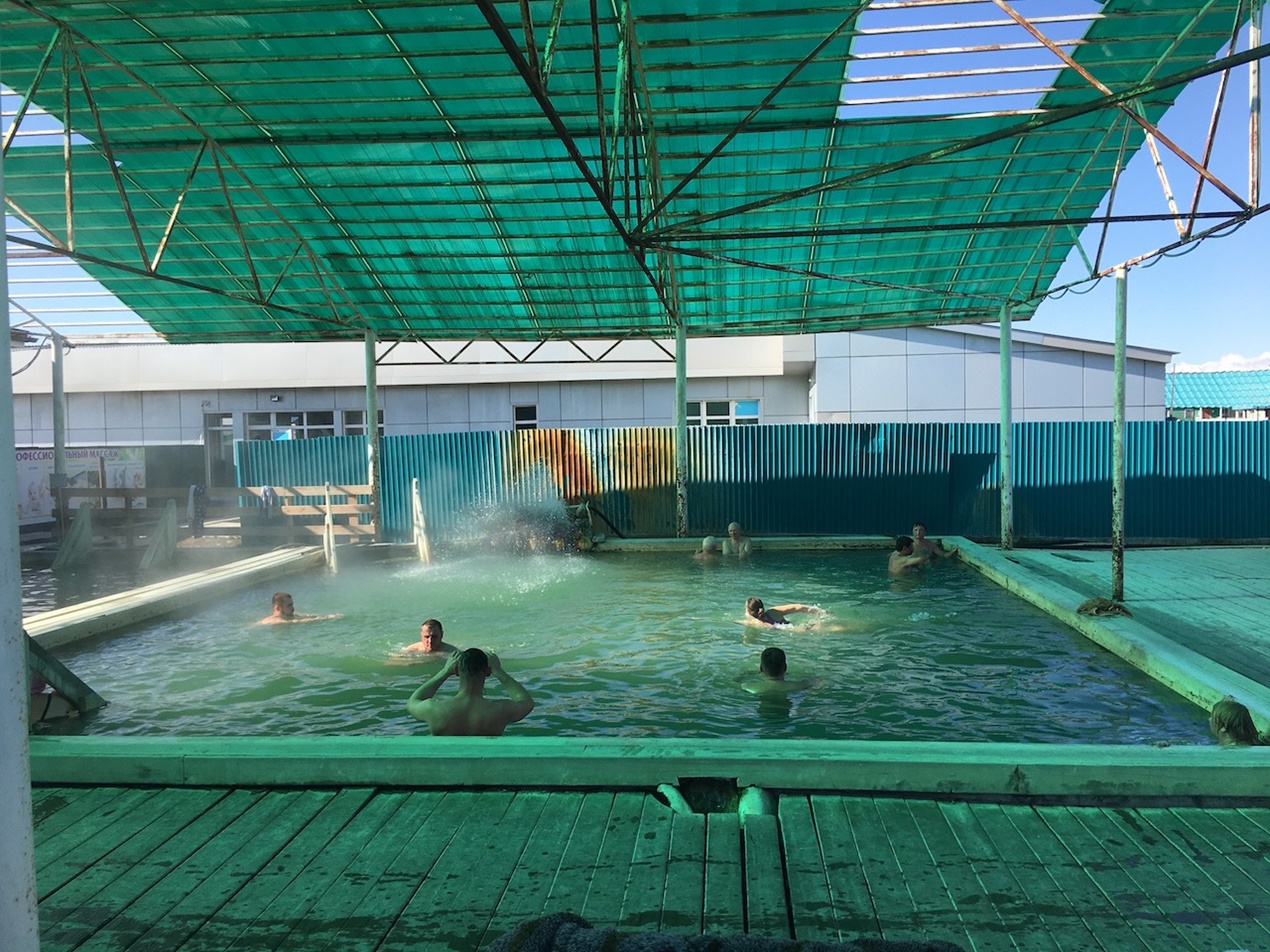 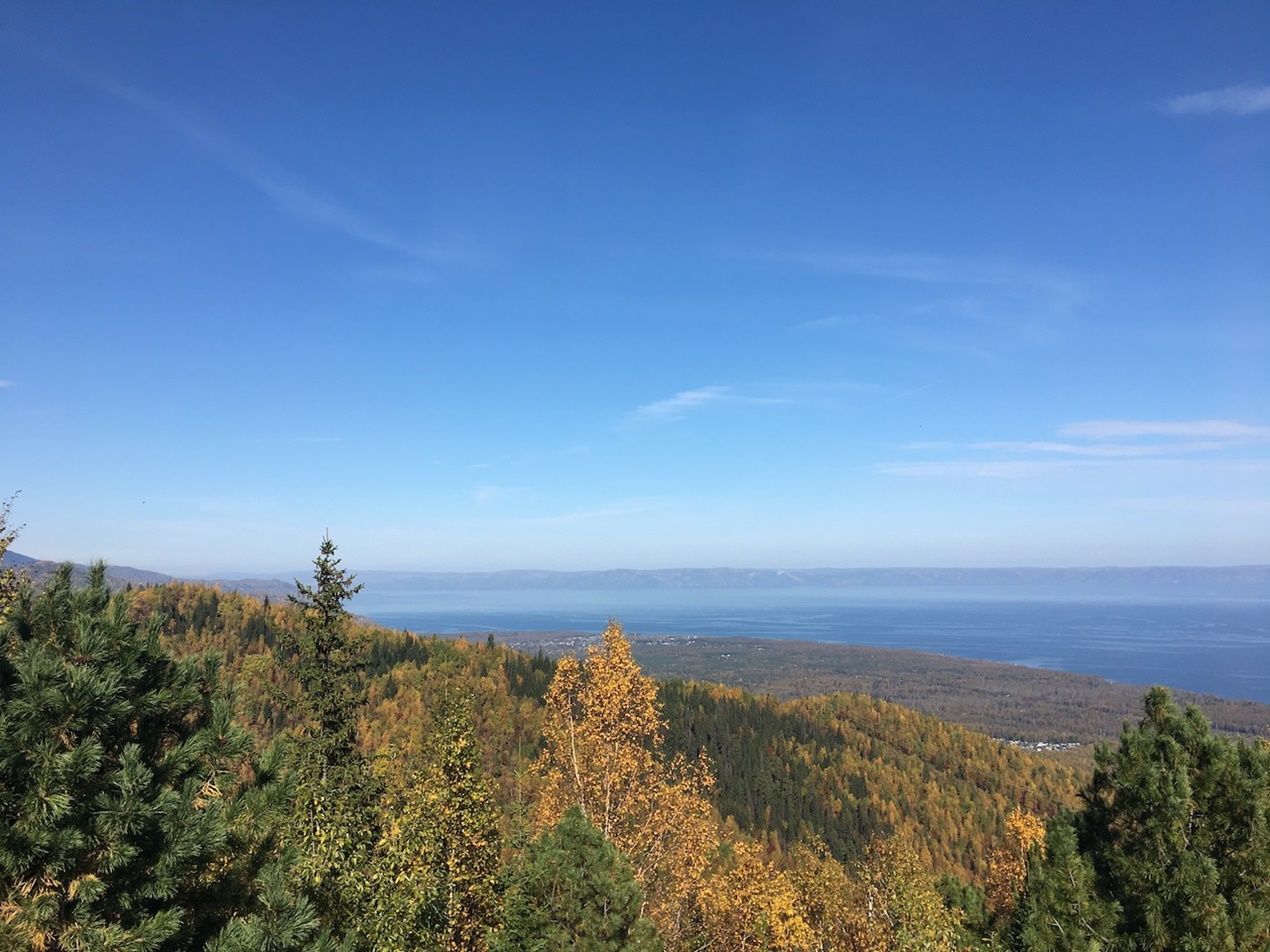 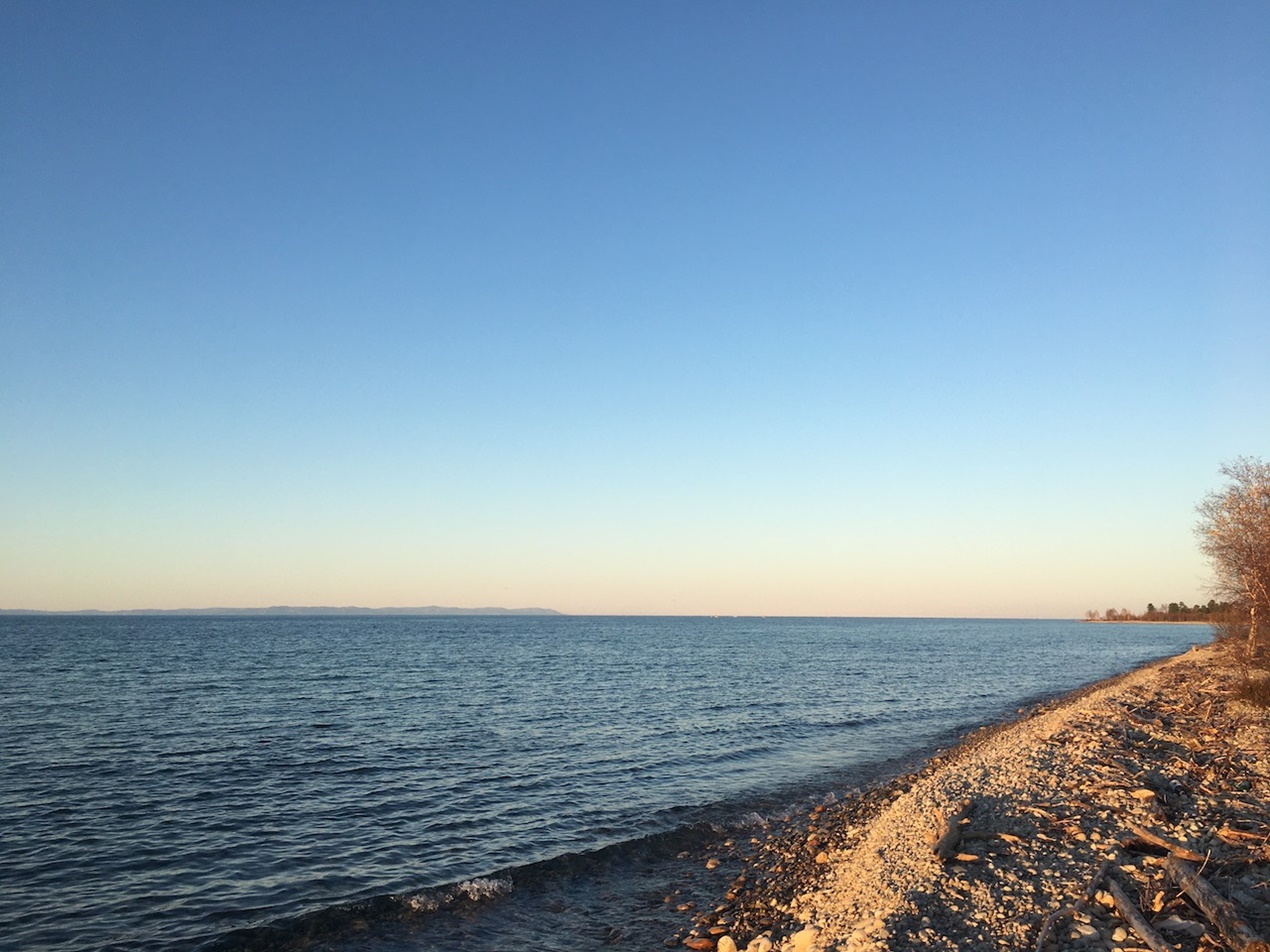 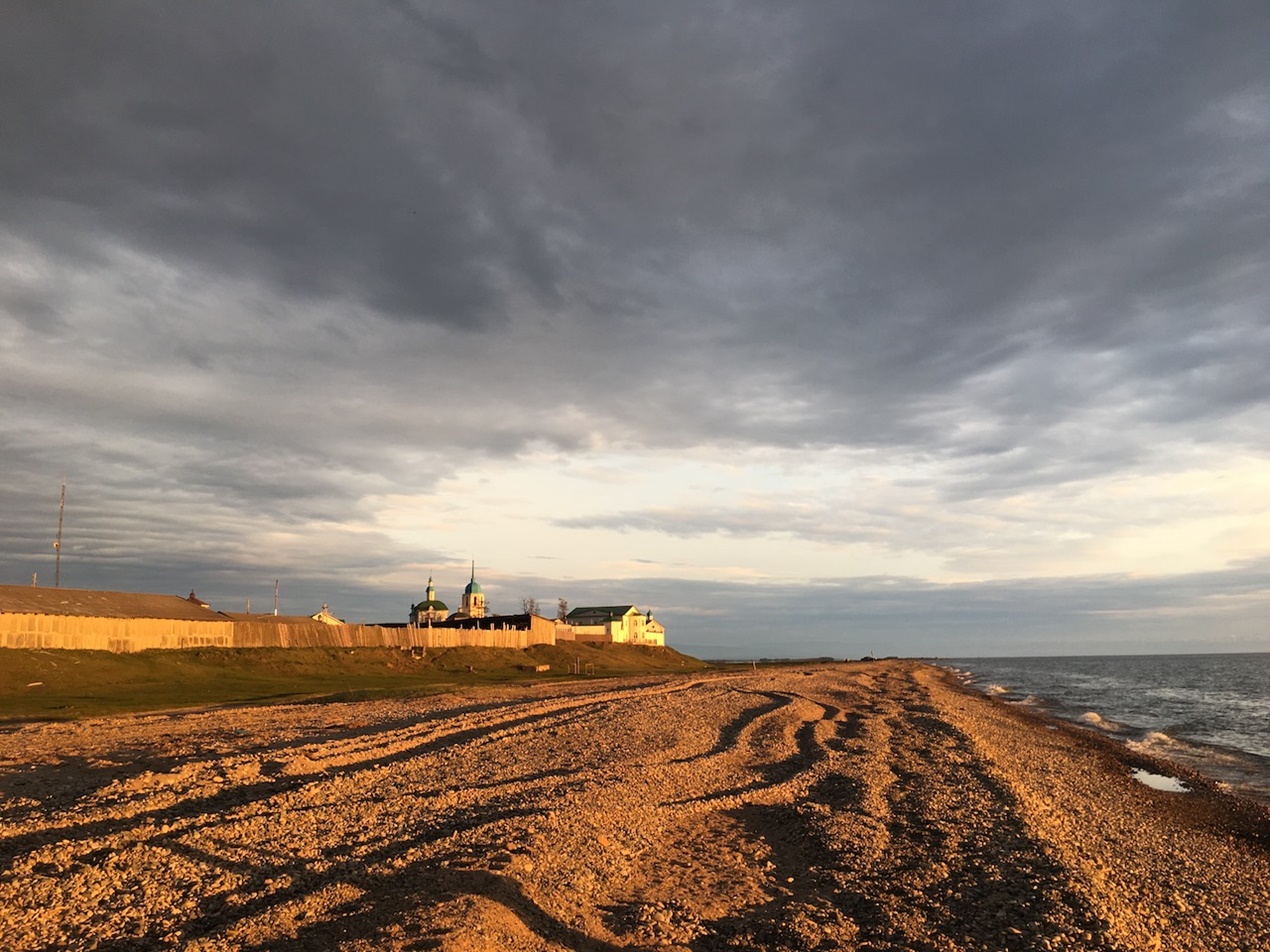 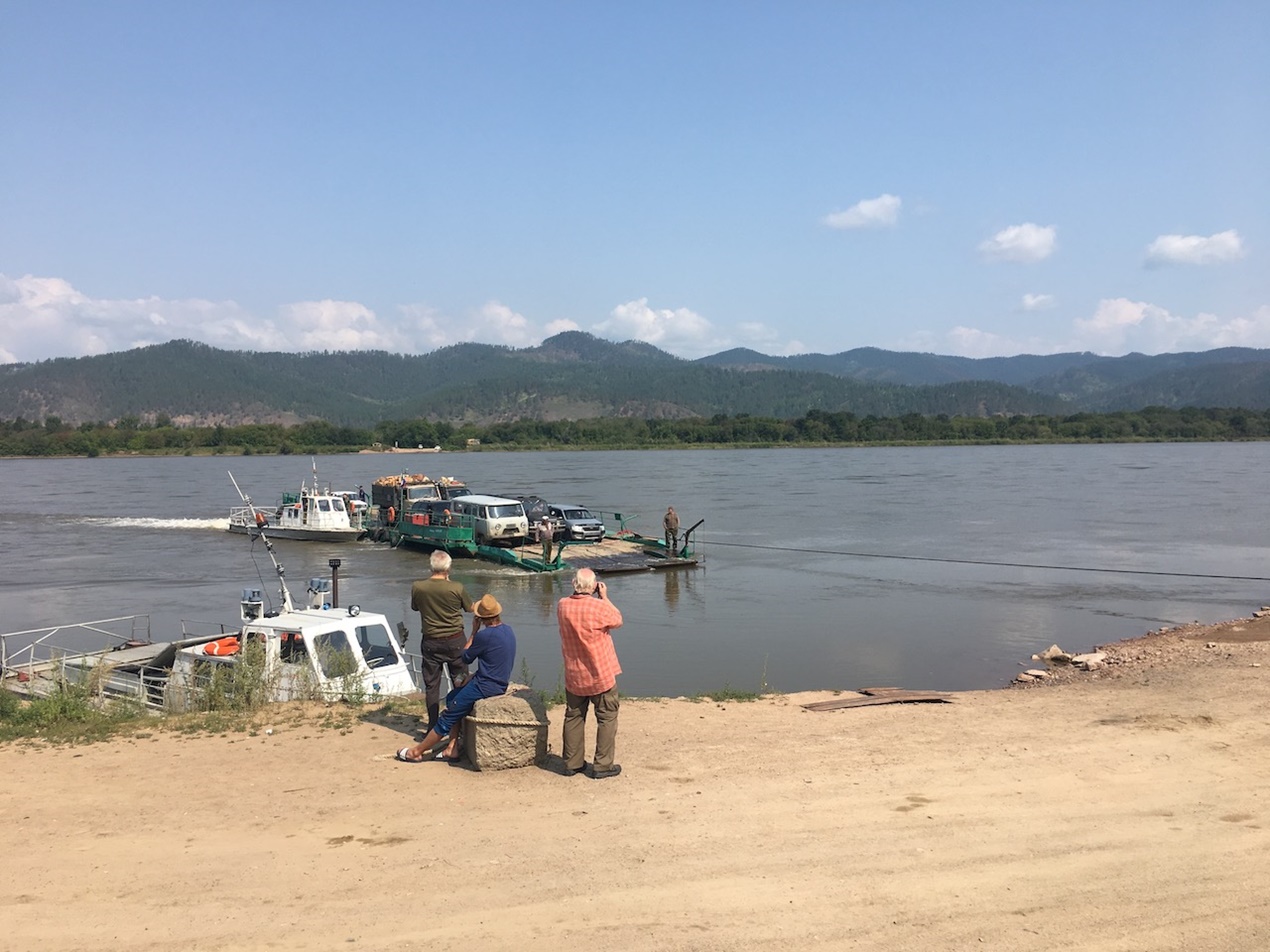 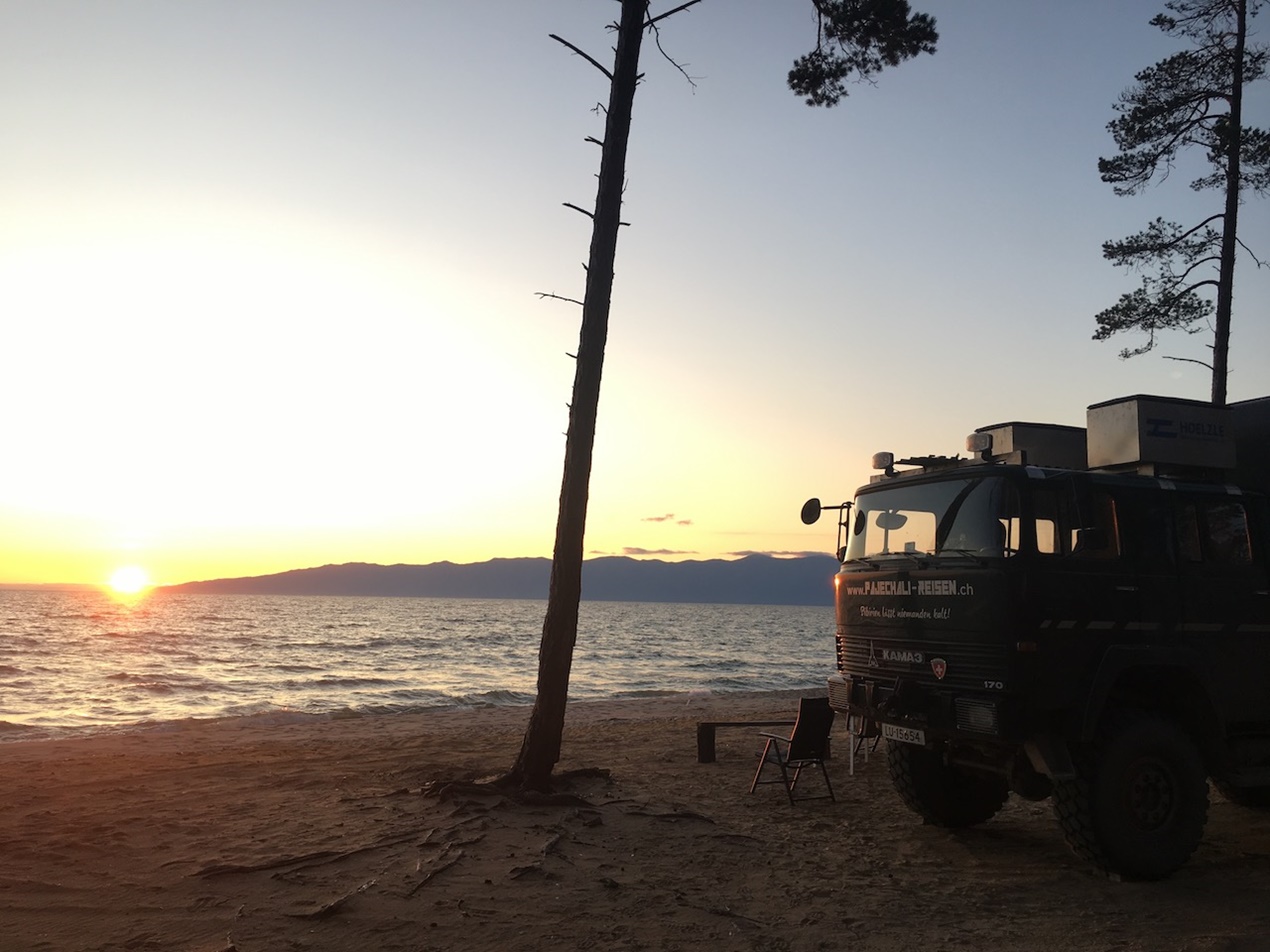 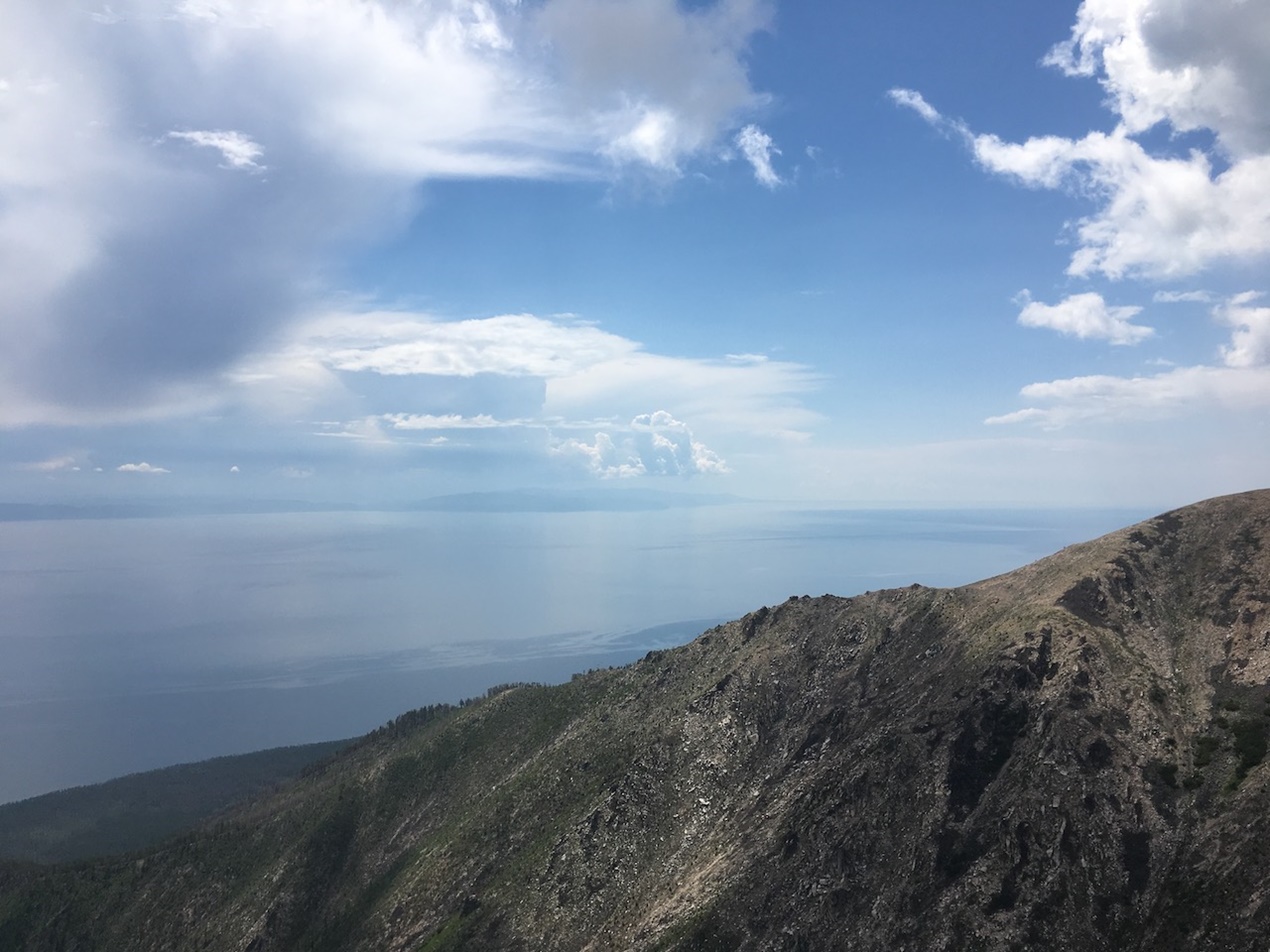 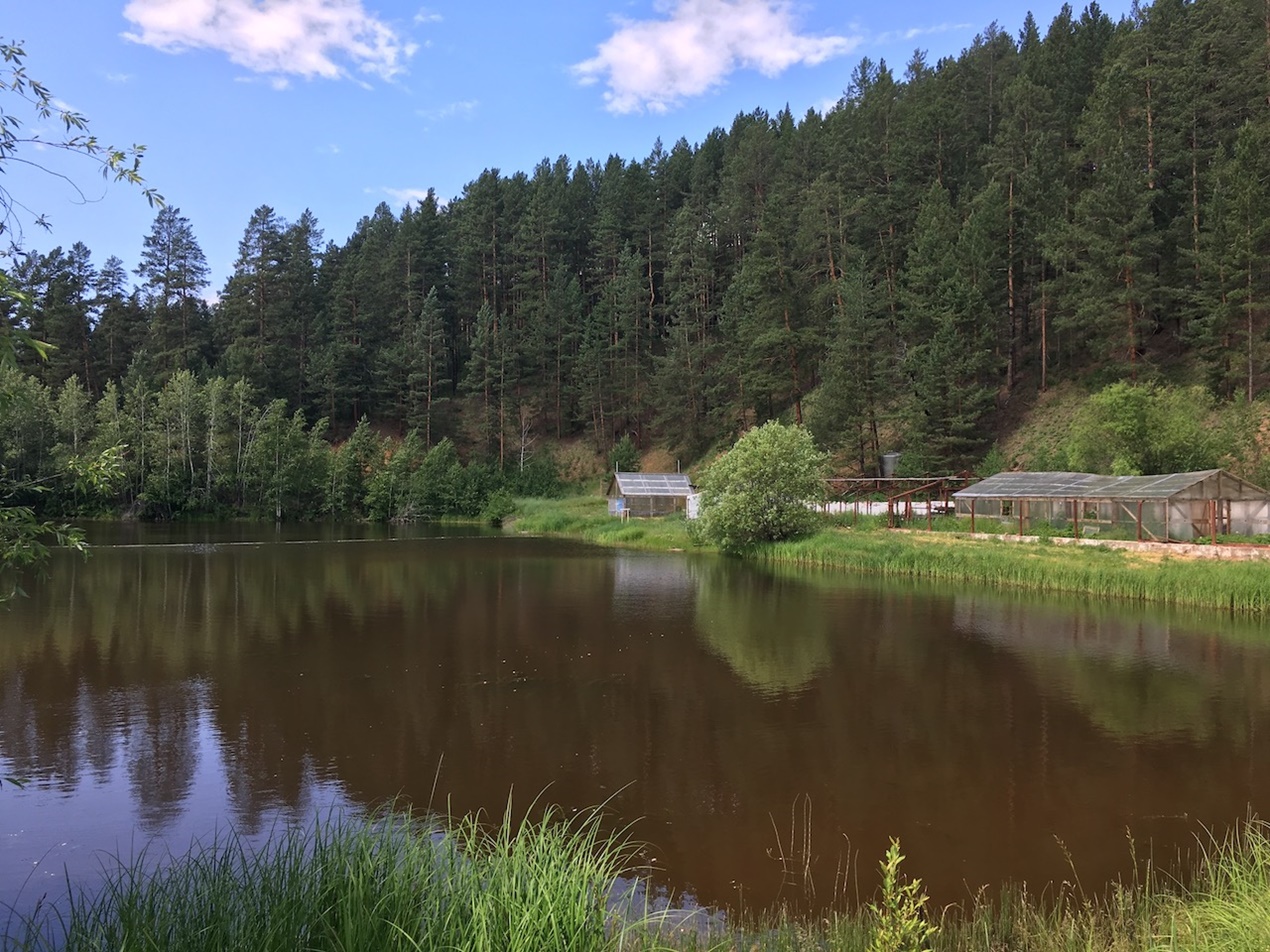 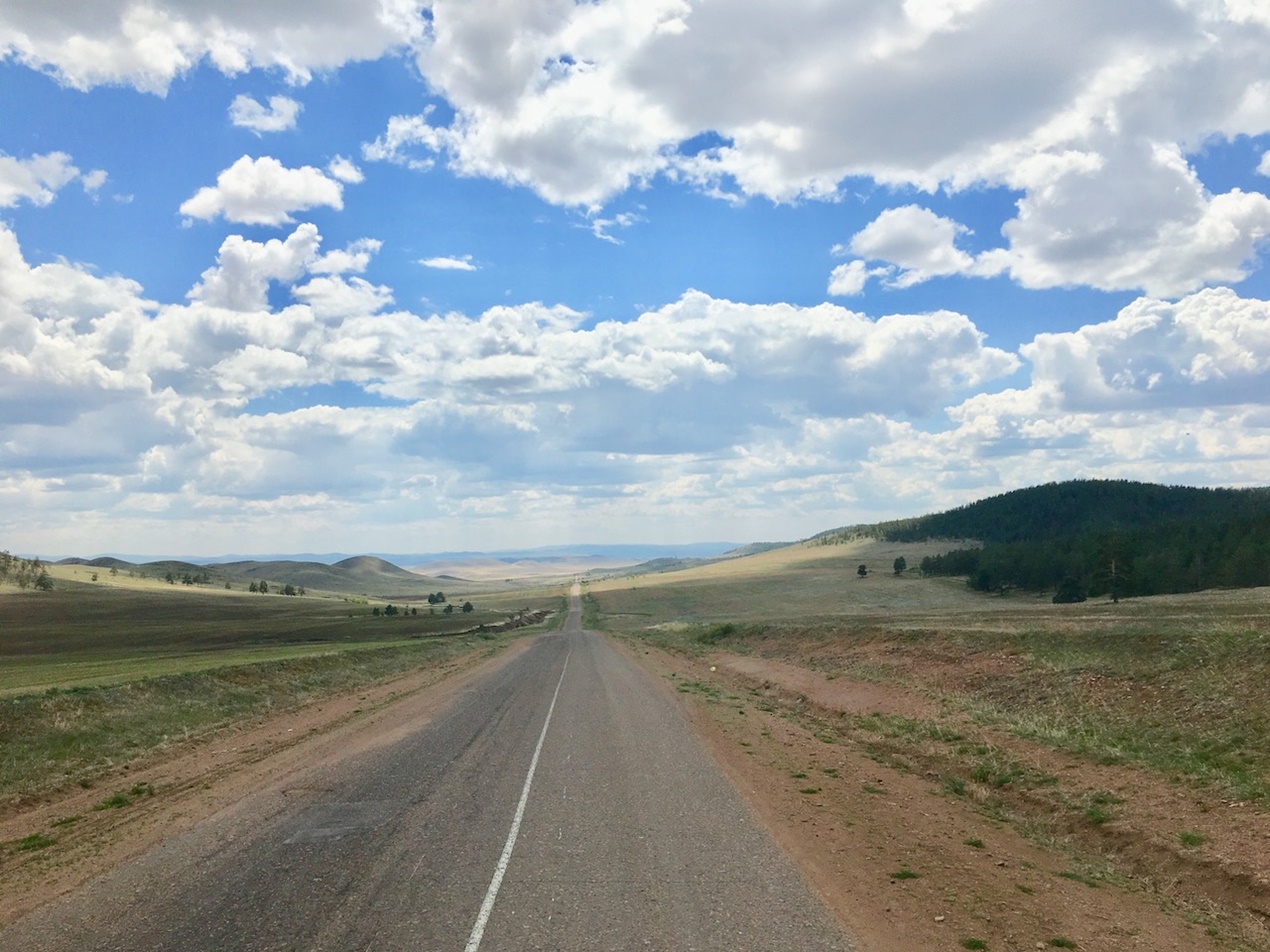 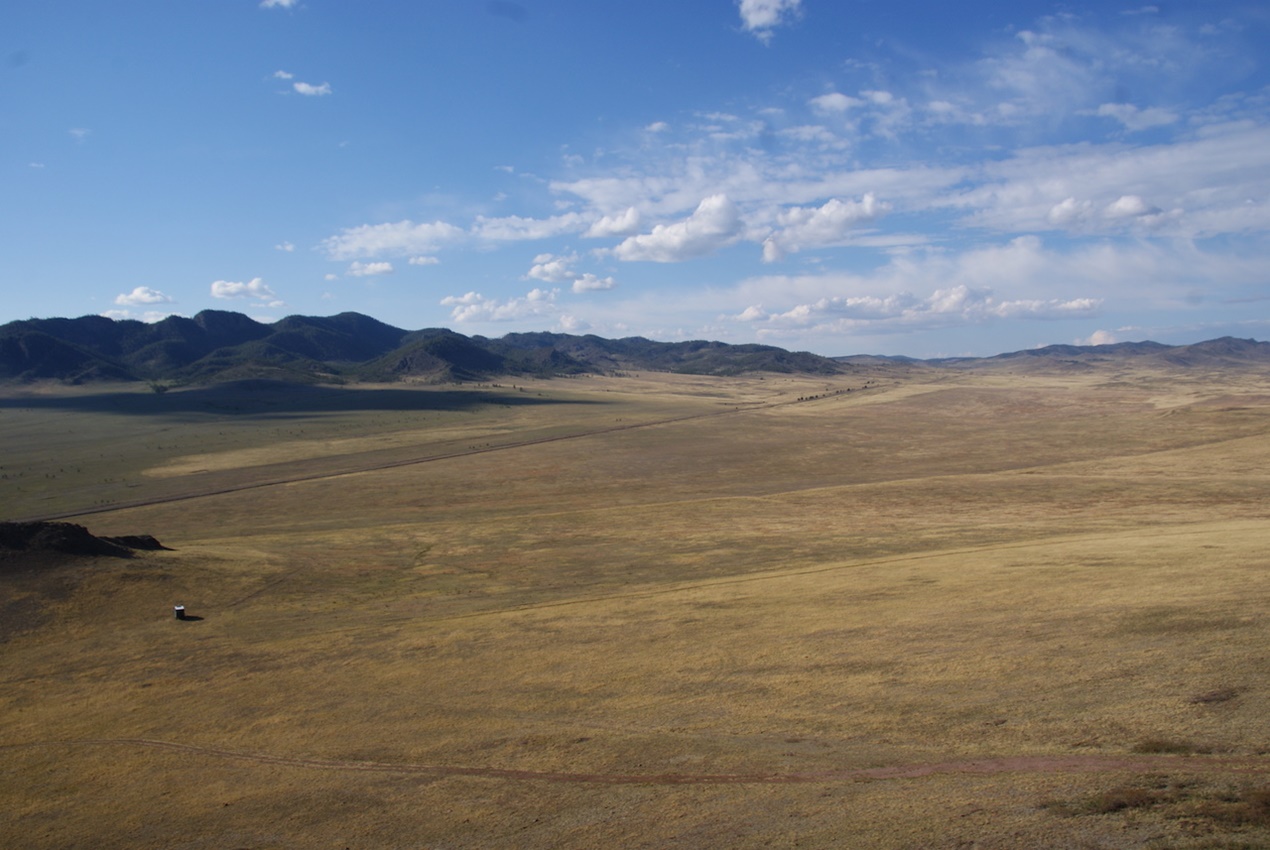 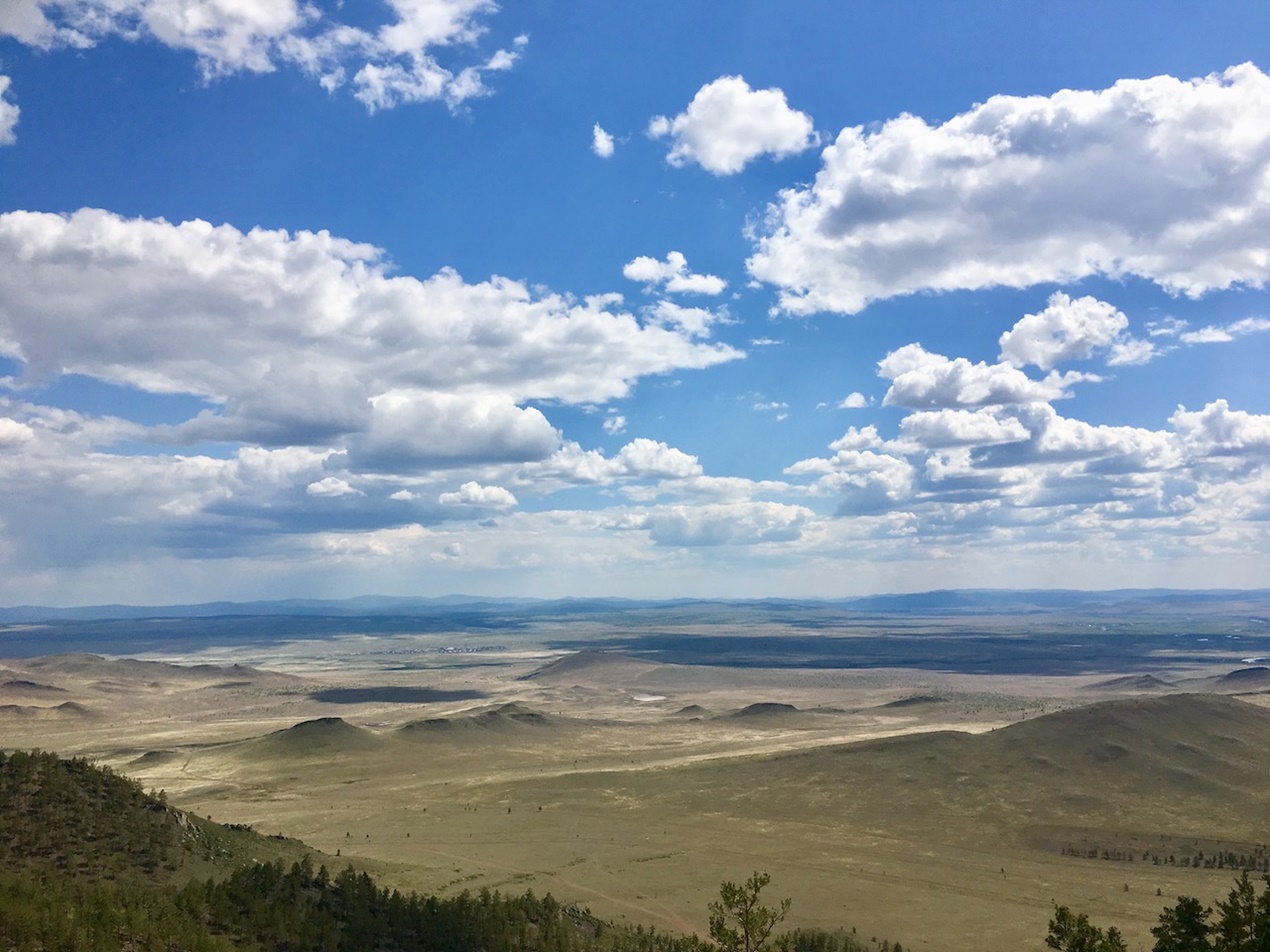 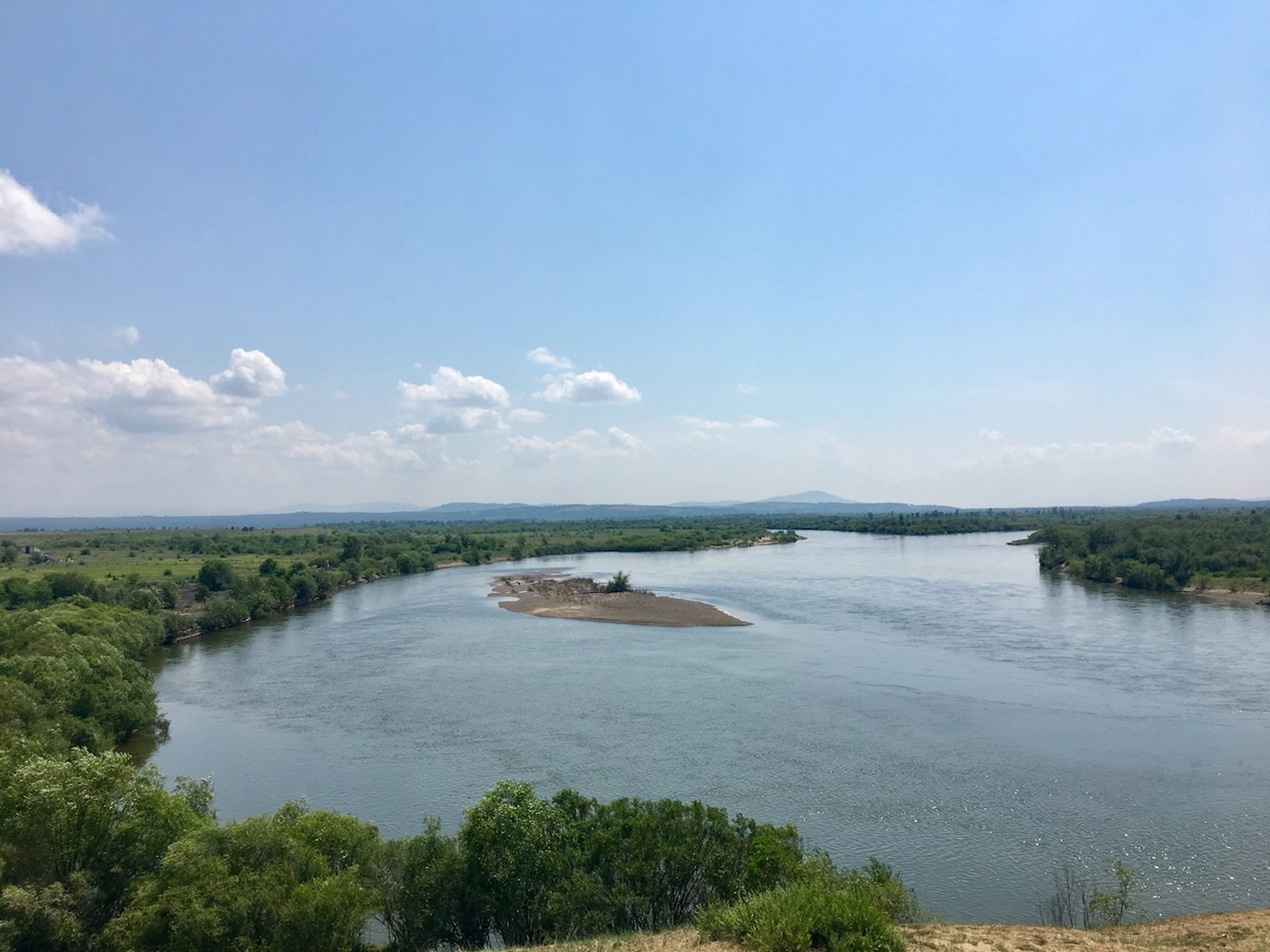 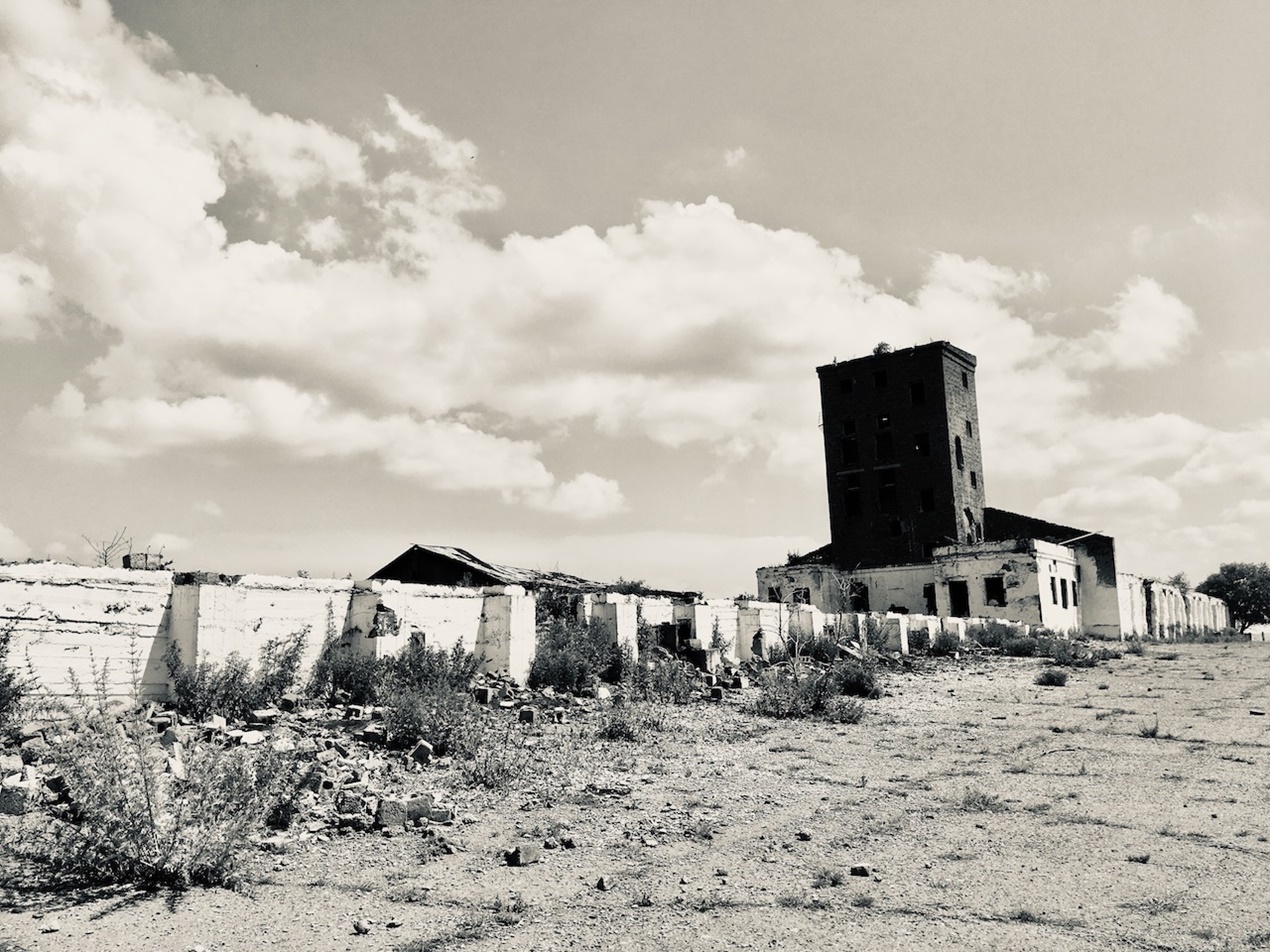 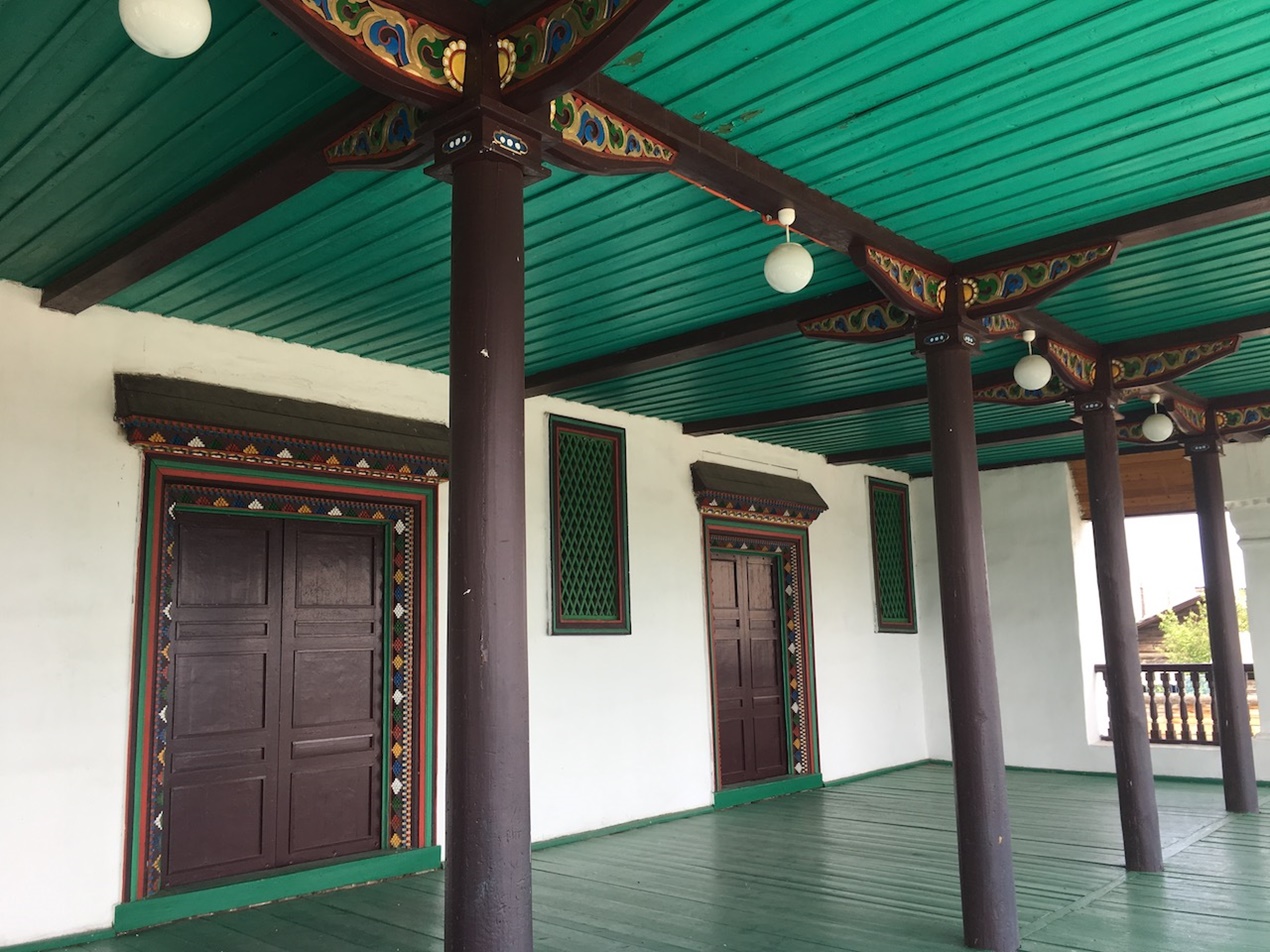 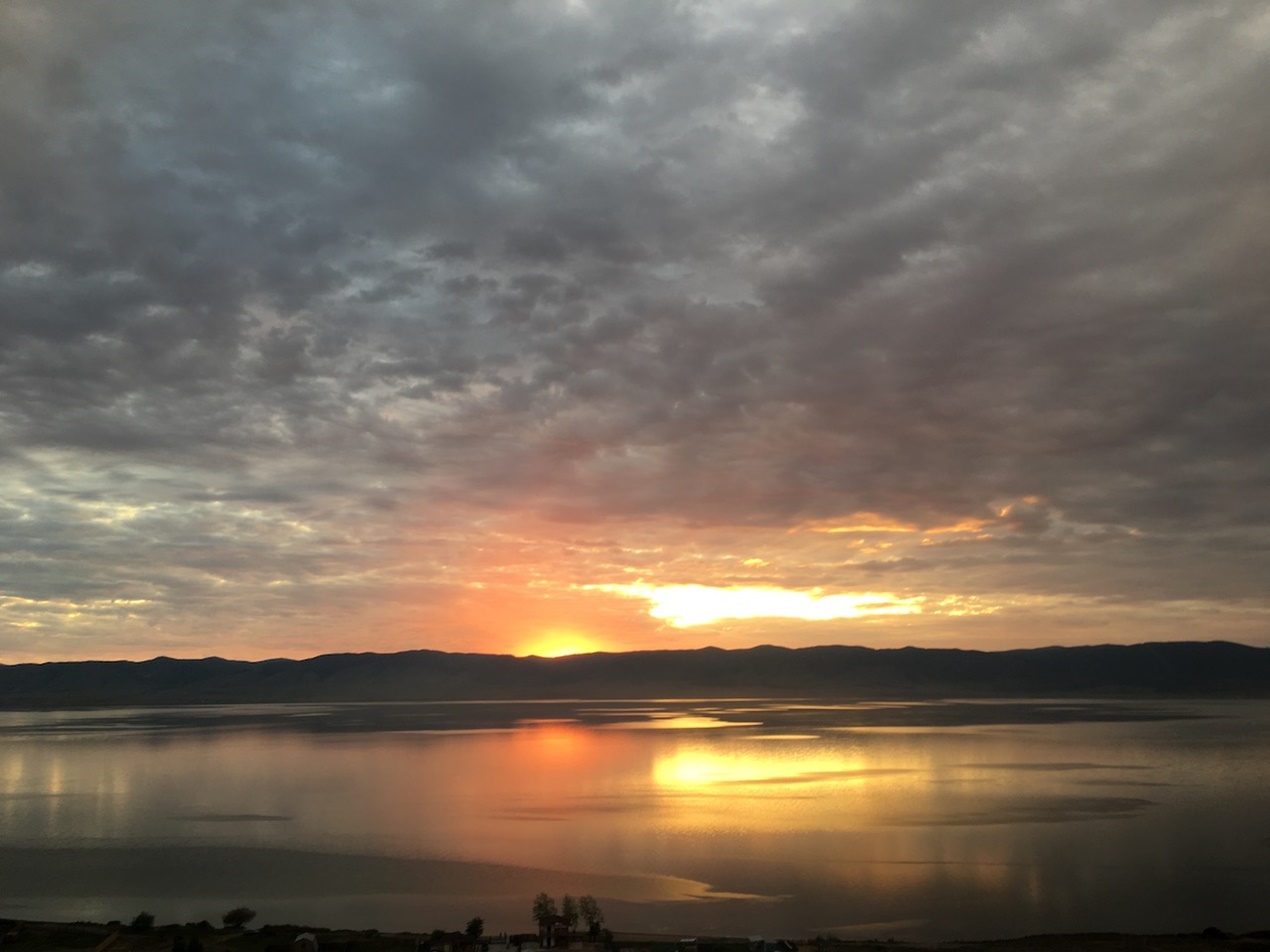 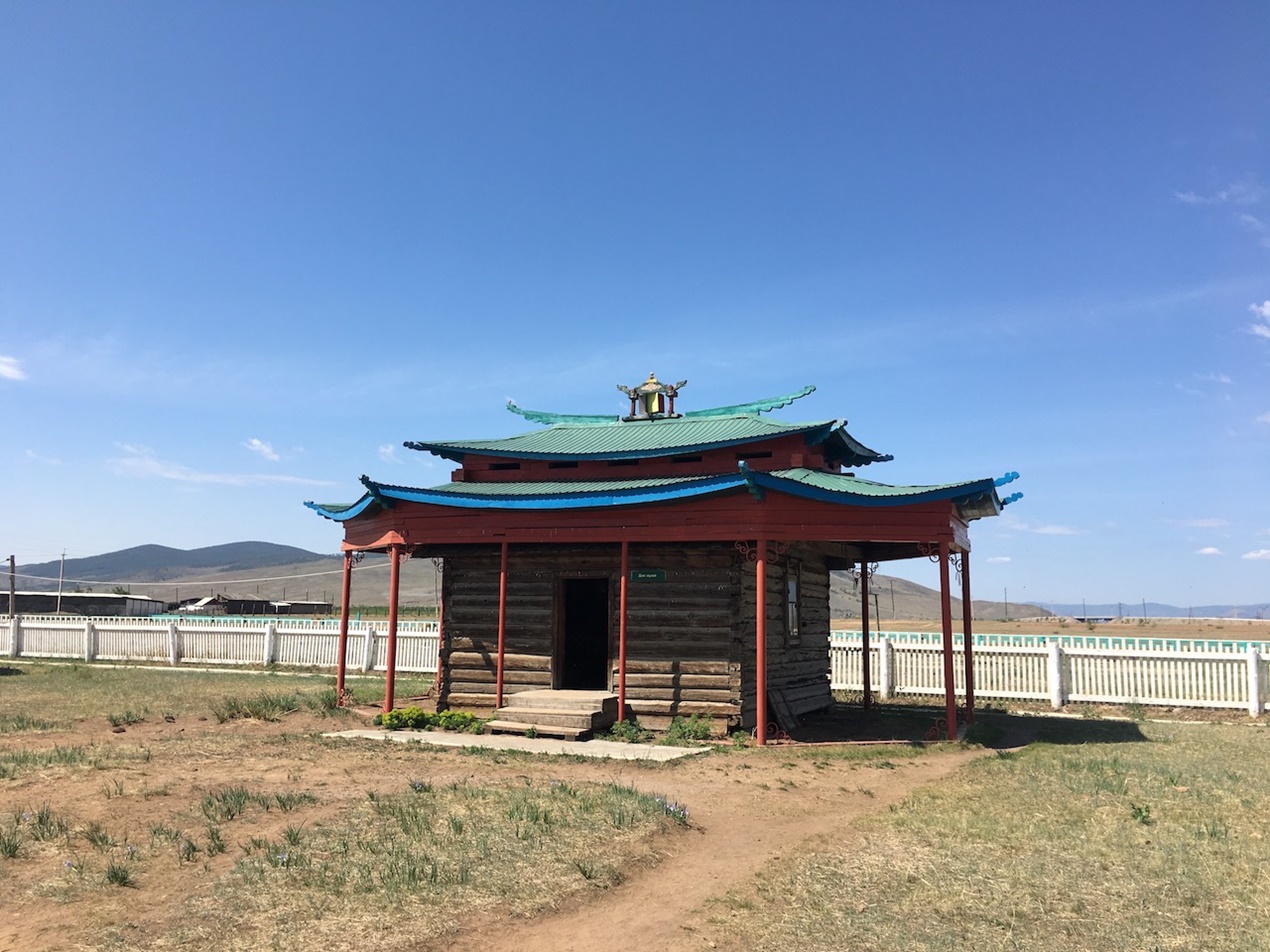 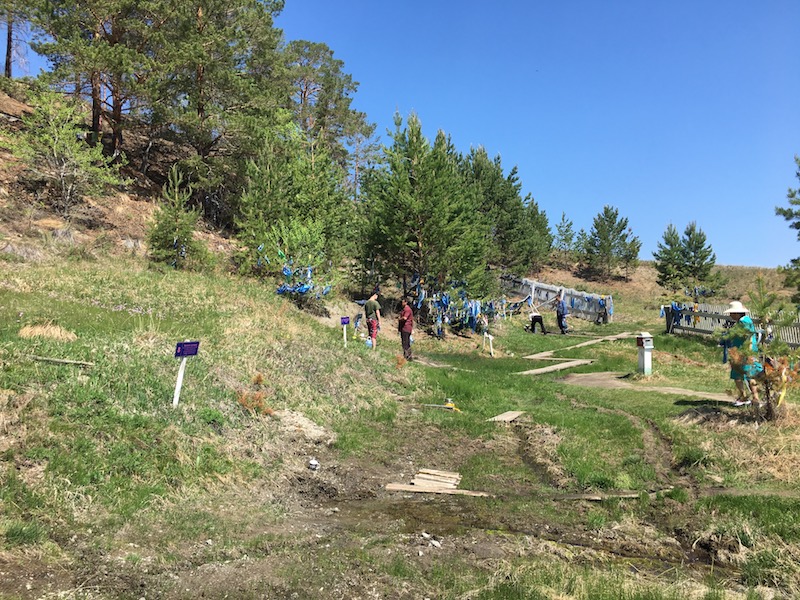 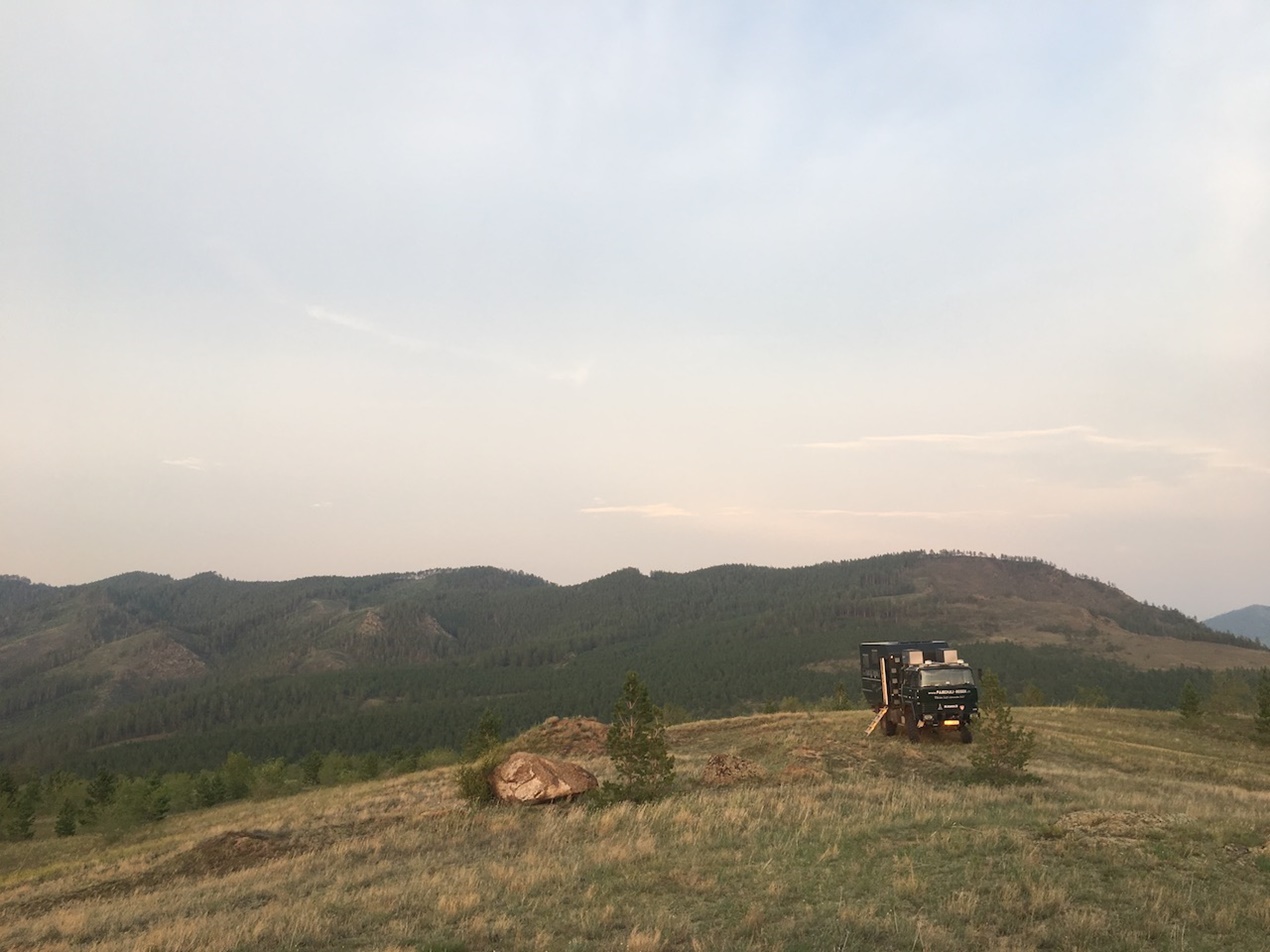 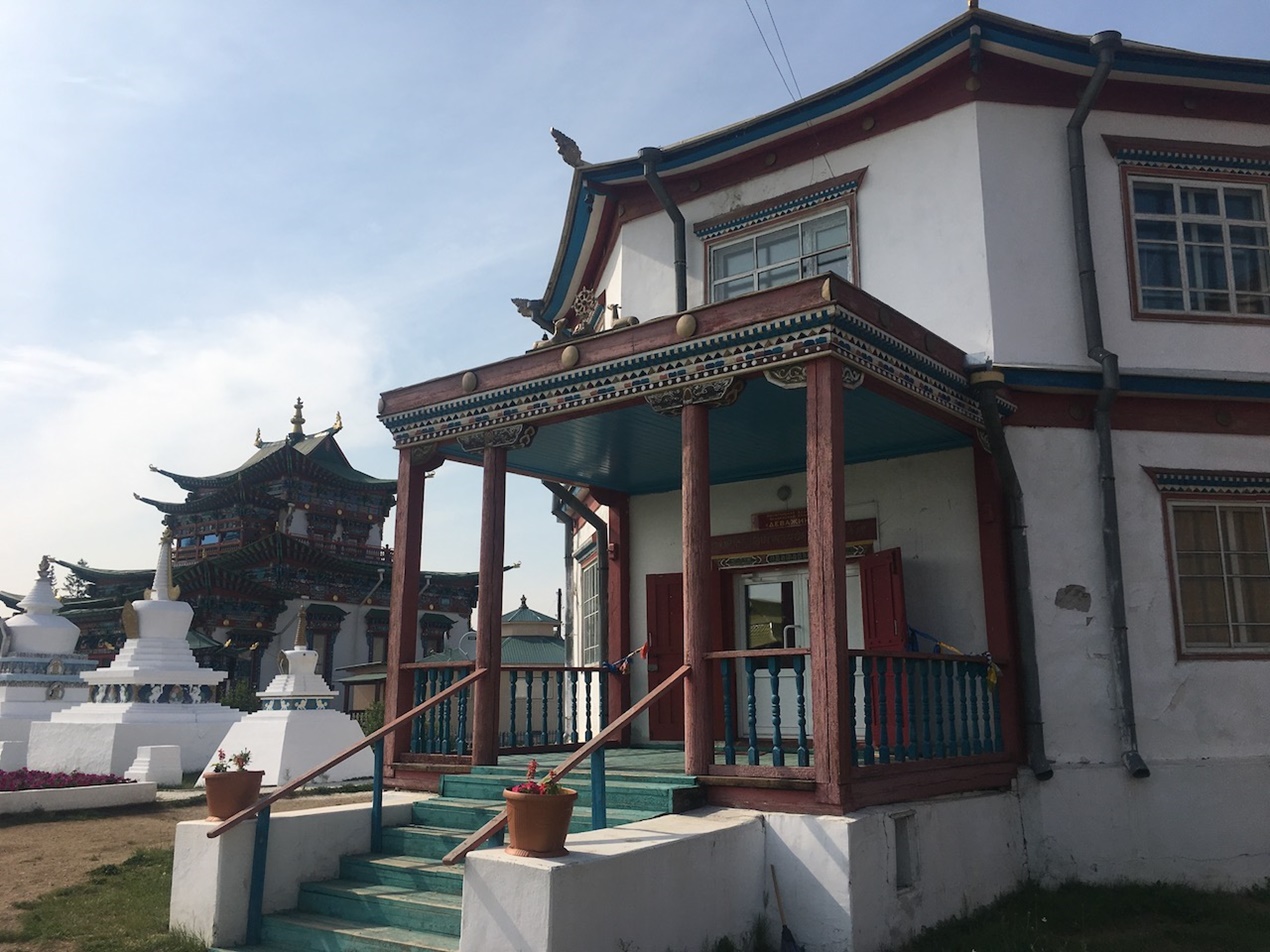 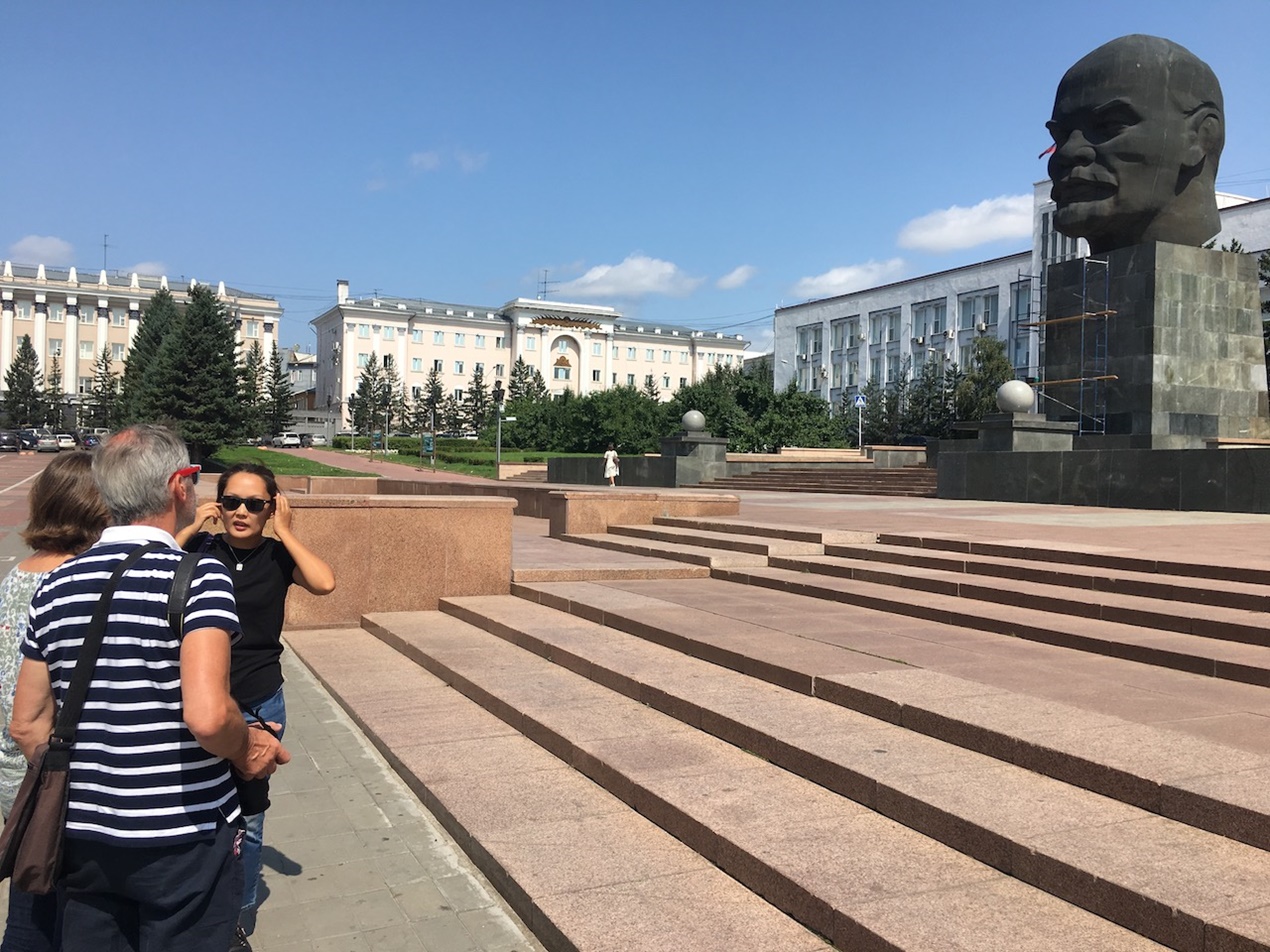 This travel will bring you to the large and wide Tunka-Valleys near Lake Baikal. Afterwards along the south and east shore. From there we’ll head south to the steppe landscape of the Republic of Buryatya in visibility of Mongolia. We’ll visit places, where according to the legends, Genghis-Khan has spent his days and get acquainted with the Buddhist traditions of the country. You will experience different landscapes, hot springs and last but not least, Lake Baikal from up close. There’s much to learn about the different cultures and ways of living from the local residents.

1. Day
You’ll arrive by plane or with the Trans-Siberian railroad in Irkutsk, where I’ll already be waiting for you. We will make a little sightseeing tour through the city and in the afternoon, with the Trans-Siberian railroad over the Olcha-Plateau to the southwest end of Lake Baikal. In the village of Sljudjanka with its unique train station of white marble we will transfer to our travel vehicle. After a short drive, we’ll camp in the village of Kultuk directly at the lake, where you can relax from your travel strains on a deck chair. Or maybe a little bath in Lake Baikal?
You will spend your first night in the travel vehicle.

2. Day
We’re leaving the lake and drive to the picturesque nature reserve of the Tunka-Valley. On the way, we’ll visitthe sculpture park of the artist Andrej V. Mikhailov, near Bystraya, until we’ll get to the health resort Arshan, at the food of the Khamar-Daban mountains, also known as “Siberia’s Davos”. Although it presents itself much more modest than Davos. Arshan is a pretty little village with a big health resort and different buildings for spas. We’ll stay the night at a nice guesthouse. Our travel vehicle will be in the enclosure. You now have the possibility for a comfortable promenade in the health resort to the mineral springs and you can visit the market stall, where you can marvel at the unusual offer on herbal-and other teas. Dinner will be served at the guesthouse and if you want to use the Banja afterwards, I can only recommend it to you (one hour is included in the travel price).

3. Day
If you want to take a sunrise-hike in the morning, we’ll have to go to bed early the evening before. The exhausting and steep hike to Pik Ljubvi takes about 3.5 hours. To get to the summit in time, we’ll have to start our march at two o’clock in the morning. After returning, no matter if we take a night-or day-hike, we can recreate in the guest house. A visit to a Banja (Russian sauna) works wonders after such a tour!
Alternatively, we can take a 1.5-hours long, comfortable hike to the well-known waterfall, which we’ll connect with a trip on rarely walked paths to the cold mineral water springs Old-Arshan in the deeply hidden boreal forest. This hike takes about four hours there and back and is mostly straight ahead.

4. Day
Our ride today will take around half anhour and leads us to the health Resort of Zhemchug. We’ll place ourselves on the big “campsite” at the banks of the river Irkut, which gave its name to the city of Irkutsk. In Zhemchug is a hot water spring, which accidently has been found 40-50 years ago during drilling work. Today there’s 55°C hot mineral water in a basin. Meanwhile, a spa has been built with massage possibilities, drinking treatment, bathing treatment, guest houses, restaurants, market stalls etc. Even after many years, it all looks a little provisional. Nonetheless, bathing there will do you good and is extremely pleasant.

5. Day
Today we’re looking forward to a longer trip. We want to arrive in Novosneshnaja at the south bank of Lake Baikal. You can expect about four hours of straight driving. If the weather is nice, we’ll will take the funicular in Baikalsk to the mountain Sobolinaja which is around 900 m.a.s.l. From up there you have an overwhelming view over the south part of Lake Baikal and become aware of its size. In the afternoon, we’ll arrive in the village of Novosneshnaja and camp at the pebble beach directly at the lake.

6. Day
Our trip continues, and after about an hour, we’ll visit the interactive Museum of Baikal in Tankhoj. An extremely worthwhile goal. The museum offers an excellent overview over the being and nature of Lake Baikal in Russian and English. Afterwards, we’ll be on the road for another two hours until we arrive in the village Posol’skoe. We will stay in the shadow of the monastery of Posol’skoe directly at the Baikal and if possible, cook over open fire. The shore in this region is very welcoming for long beach promenades in isolation. Another night at Baikal is waiting for you.

7. Day
This day, we will spend at Lake Baikal. The village Posol’skoe with its typical colourful Siberian houses and the mighty Orthodox monastery invite you to take a closer look. Or you take a longer beach promenade, or go bathing, or swimming. Whatever you do, let your soul dangle!

8. Day
Today we’ll have to drive for another while. The pure driving time is around four to five hours. Over the river Selenga we’ll cross with the ferry. Our interim target is near the regionally known tourist place Ust-Barguzin. We’ll be driving mostly on well-built roads. For the night, we’ll stay at the Baikal Beach. Since this is a well-known and easy to get bathing place, we won’t be completely alone. The local tourists are kind and reserved people, and most of them return to their villages in the evening.

9. Day
We’re staying in Ust-Barguzin at the beach. From here on you have different possibilities. On one hand, if the weather is good, we can hike up to the highest point of the peninsula “Holy Nose”, which is pretty exhausting and will take up to about nine hours. The view on the top is breath-taking, so every exhaustion of the steep rise and decent is worthwhile. On the other hand, there’s the possibility, that we will be driven to the nearby hot spring “Guzikha”. The way there is pretty nasty, which is why I don’t drive there with my truck anymore. But the spa there is magnificent, and it lies enchanted in the forest. Of course, you can also stay the day at the beach! I can also organize circular flights with plane or helicopter for you. These offers are not included in the services of the trip.

10. Day
On well-built roads we’ll speed southwards. After about three hours, we’ll arrive in front of the gates of Ulan-Ude. There, if desired, we have the opportunity to visit the ethnographic open-air museum. With or without the visit of the museum, we will drive for another one to two hours through Ulan-Ude, until shortly after the city, we arrive at the so-called Lion Rock. A breath-taking point of view over the Selenga-Valley.The landscape changes its shape noticeably. We’re drawing closer to the border of Mongolia and are in the South-Buryatyan steppe. Our goal today is the steppe shortly befor the village Podlopatki.

11. Day
After a short hike uphill, we’ll visit the former “Castle of Genghis-Khan”. This has been a strategically important lookout, because there are ancient, natural holes to see signal fires. We’ll stay the night in this place.

12. Day
Today, after driving for four hours through hills, steppes and forests, we’ll arrive in the village Gusinoe Ozero, at the Lake of the same name. In this village is one of the oldest Buddhist monasteries of Russia, the Tamchinsky-Datsan, which did not fall victim to the terror of Stalin. After visiting the historic monastery, whil drive to the Goose-Lake (Gusinoe Ozero) to stay the night there.

13. Day
Todays’strip will take up to two hours and leads us to the largest and most important Buddhist centre of Russia, to Ivolginsk. If you wish, we can visit the birthplace of the prominent Lama Dashi-Dorsho Etigelov, as well as the Valley of Wells, where in the narrowest room, 16 different mineral water sparkleout of the hill. Some for inner, others for outer treatment.
In Ivolginsk is the biggest and most important Buddhist centre of Russia. In the last years, the complex has grown immensely, not least because it is home of a special kind of mystery. The corpse of the lama Etigelov, who died in 1917, does not show any traces of decay. Apparently the lama must have reached absolute meditation. You can also look it up in Geo 360° > http://www.geo.de/GEO/geo-tv/das-mysterium-der-sibirischen-mumie-2663.html(in German) or on Wikipedia > https://en.wikipedia.org/wiki/Dashi-Dorzho_Itigilov(in English). You will have a tourthrough the monastery where you can ask the lama Dashi-Dorsho-Etigolow for health and well-being.
After that, we will drive to our campsite in front of the gates of Ulan-Ude. You can choose freely, if you want to stay the night in the travel vehicle, or, at an additional charge, spend it in one of the newly build pavilions on the campsite (please add this information to your registration, so I can reserve the pavilions in advance). Also, at an additional charge, I can offer an old-Russian, Buryatyan or Soviet folklore evening, including the corresponding food.

14. Day
Shortly before lunch, a two-hours long tour through the city of Ulan-Ude awaits you. The rest of the afternoon is at your free disposal to shop or get souvenirs. In the evening, we’ll go dine together and look back at the trip together. You can decide if for your last night you stay in the travel vehicle, in a pavilion, or if you want to get to a hotel, which I can organize for you (pavillion or hotel is not included in the travel price).

15. Day
Unfortunately, your flight back or your continuation of the journey on the railroad is awaiting you. If you wish, I can take you to the airport/train stationand help at the check-in.